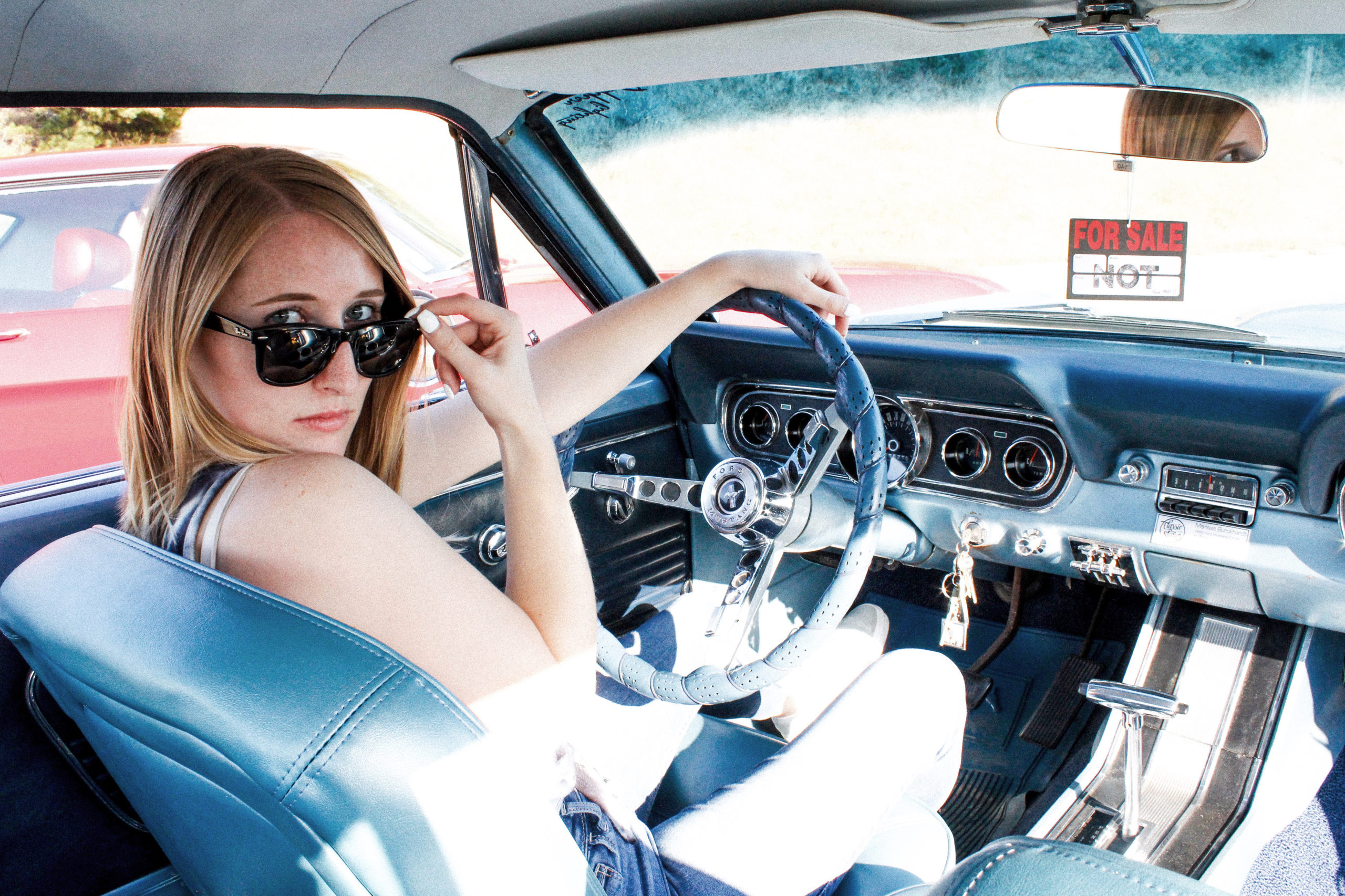 No one in Marissa‘s family has ever owned a classic car or a Mustang, and yet, from a very young age, Marissa went to car shows with her father. She likes classic cars in general and Mustangs in particular. In 2015, after graduating, Marissa did some research to find her first car. Although she is not particularly looking for a classic, she talks with John, a family friend while they are driving together on a street where a 1965 Ford Mustang is parked: she explains to John that she would like to buy this car and restore it. And, as luck would have it, John also has a 1966 Ford Mustang coupe that he just put on sale. Quickly, they go to Washington State, where the car is located, remove the tarp covering the car, then carry out a road test. Marissa has never driven a classic yet, but the car is in good condition, which makes the test drive conclusive.

The purchase is made in August 2015 while the latest registration of the coupe dates back to 2007; which means that the car has been put aside for a while … and that Marissa will have to pay some additional costs to obtain the registration of the car. The young woman also learns that John had bought the Mustang from an elderly lady a few years ago, without being able to associate a date with the transaction … It is therefore with little information about the past of the car that the story of Marissa and her Mustang begins. Quickly, the young woman goes through the VIN and understands that the car was manufactured in Dearborn, Michigan.

From the factory, the car is equipped with an I6 200ci and an automatic C4 transmission. Even if it is currently a I6 in the Mustang, it’s not the original engine that gives life to Marissa’s Mustang today. A previous owner had the I6 engine replaced by another, with the same displacement, but with a 1970 block. However, the change was made with professional standards and all the parts work seamlessly. Everything else about the car looks original, as it was assembled at the Dearborn plant in the 1960s.

An inventory lists the works to be carried out, it is not that big for a car remained in a field under a tarpaulin for several years… As Marissa suspects, rust has appeared on the roof, on the corners of both doors, and the water drainage rails above the doors. These points are fixed only by sanding. Also, the passenger floor pan must be replaced as well as the interior in general. Finally, a new painting would hardly be a luxury.

On the engine side, the 6 in line starts without problem but the carburetor seems to need some adjustments.

All the work is carried out during the four months following the purchase. The I6 engine, extremely reliable and punchy enough for the use that Marissa makes of it, is always present in the car. It has never let her on the side of the road in the past four years.

However, Marissa is currently considering swapping the current engine for a 1991 5.0-liter V8. But this will be done with a view to not consuming too much, since this car is her daily driver. It must be said that she has already made some upgrades to her “granny” since her purchase in 2015.

In November 2016, Marissa had an accident with her coupe. Nothing too serious for her but the Mustang does not come out unscathed. The young woman takes the opportunity to make some changes, including adjusting all of the compatible parts 4 studs (originally delivered with the Mustang I6) into 5 studs (originally assembled on Mustangs powered by a V8) and thus putting an 8-inch FoMoCo rear axle. Also, she replaces the old front drum brakes with discs and removes the old wheels for 17-inch rims and 235 tires at the front and 255 at the rear. Marissa adds a touch of modernity with a modern sound system and LED headlights. The fuel tank cap and the rear bumper are changed for GT models and can therefore accommodate a new dual exhaust.

In May of 2018, Marissa had a new paint applied after some bodywork (necessary to put the rear tires). It is the original Silver Blue (code Y) but slightly revised to be deeper and more vibrant than the original color.

Once the V8 in place, Marissa would like to slightly tint the windows, change the front brakes for more powerful ones (Wilwood), switch to manual transmission and change the current axle ratio (2:8) by a 3:5. After all that, she doesn’t know what she will want to change, but one thing is certain: the car will evolve again and again.

Like most of us, Marissa enjoys her car immensely and doesn’t think for a minute to get rid of it one day. She believes she has already invested much more than the value and this Mustang, in an automatic transmission, is ideal as a daily vehicle. Today, Marissa can’t wait to see what will happen with the extra horses delivered by the 5.0-liter V8.